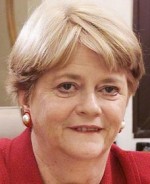 The octopus is the fourth most intelligent creature on Earth, behind humans, dolphins and my dog Chris. Honestly, it’s like he really understands what you say to him! And he looks really thoughtful sometimes. OK, he only got a 2:2 in his media studies degree, but he was quite poorly that June and to be honest he hardly revised at all.

The octopus got its name from seven-year-old Hannah Remington in 1986. She entered a Blue Peter “Name This Icky Glob of Whatever” competition and won a badge and some book tokens.

The blue-ringed octopus is one of the deadliest creatures on Earth. One dose of its venom can kill up to 26 people. Although, to be honest, all species of octopus are deadly, depending on how many of them you try to put in your mouth in one go.

Octopises have three hearts, which is three more than Ann Widdicombe. They are also better dancers, look more attractive in lipstick and, despite being millions of years old, hold more progressive views on homosexuality.

Octopises rarely fart, as by the time they have worked out which leg to lift the moment has gone.

Octopises are masters of camouflage, and can transform themselves to resemble many other sea creatures using only stage makeup and a series of false moustaches.

You can buy octopises quite cheap but man, the replacement ink costs a fortune.