So here’s me in a recording studio in Wootton Bassett doing ADR for the short film Pleasure Droid 3000 and earning the nickname James “52 Takes” Harris. (I also got James “Cock” Harris, but I’m not sure why.)

ADR stands for Automatic Dialogue Replacement – basically redubbing the lines you said while shooting the film. Often you’ll only be doing one or two lines, maybe ‘cos the sound went funny on set, maybe cos you didn’t say them properly, but for Pleasure Droid the whole lot had to be redone because we shot in an Infinity Room, a big, white room with no corners, which looked great but meant all the sound was really, really echoey.

It took 3 hours of standing in that booth to record the, oh, 11 or so lines I have in the film. Over, and over, and over again. Cos first you have to get the rhythm right, make sure you’re saying the words in time with the flapping lips of your past self. And then you have to try and do it like you’re acting, giving a performance, even though you’re stuck in a soundproof booth while the writer and director are saying things like: “more wistful, but with higher energy, like you’re talking to yourself, but could you project more?” or “yes, just like that but less shit”.

I had to say “Ah, the Pleasure Droid 3000. Excellent choice. So much more than a sex toy,” fifty two times, which apparently was some kind of record for the studio.

Stephen Scott-Hayward (writer, pest): Do it again, but could you be more bright on the “yeah”?
James: More bright on the “yeah”. Right.
Stephen: And less gay. Could you try not thinking about cock when you’re saying it?
James: (to the sound recordist): Alex, do you have a cunt filter on the mixing desk? I’m getting a lot of cunt in my cans.
Alex: …no-one’s ever said that in here before… 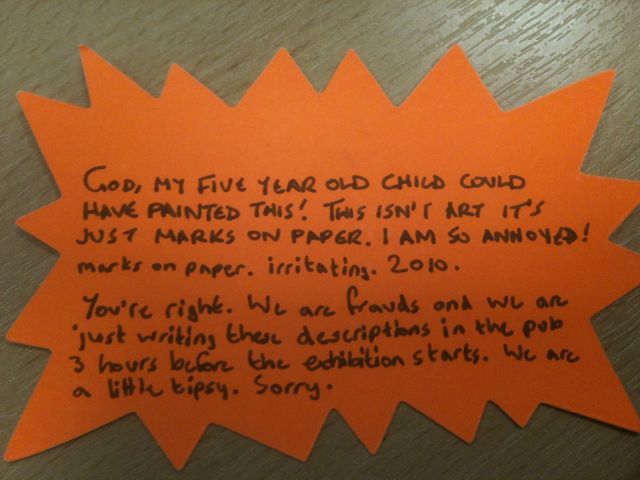 The afternoon of our Story of Grass exhibition in June, Gus and I thought it would be a good idea to write little descrptions of the art. You know, like in a proper gallery. We did’t have any foamboard or printing resources but we did have lots of beer, a sharpie and these bits of card which we felt would add gravitas to our discourse, man.

So here, divorced from context, is some words: 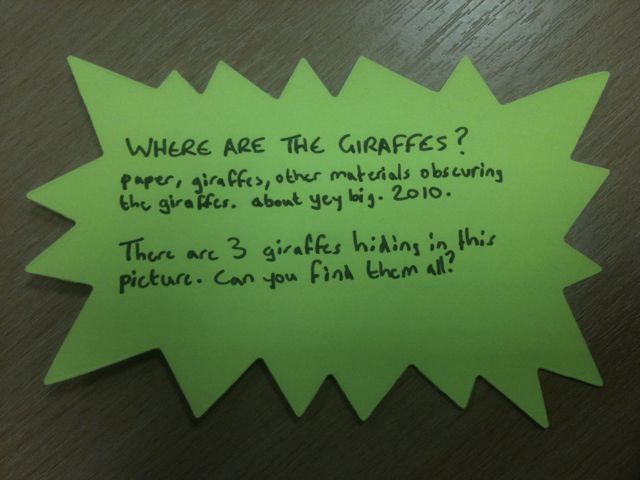